You are here: Home / Films / Race Jesse Owens Biography Film Now On Blu-Ray + DVD
Warning: file_put_contents(/home/hh111574702/public_html/wp-content/uploads/imdbcache/tt3499096.txt): failed to open stream: No such file or directory in /home/customer/www/samenjoys.com/public_html/wp-content/plugins/imdb-info-box/imdbinfobox.php on line 71


Race is an uplifting film featuring the amazing story of Olympic gold medal winner Jesse Owens. Jesse Owens was an African American, who won multiple medals at the 1936 Berlin Olympics during the rise of Hitler’s empire.

Disclosure: I received a review copy of Race to facilitate this review. All opinions are my own.

My Review of Race on Blu-Ray or DVD:

Bio-pictures sometimes fall into a trap of trying to cover everything and please everyone. I prefer film biographies that focus on a defined period in the subject’s life. Otherwise, the film may be too shallow and fleeting. I like that Race does just that — it focusses on a period of his life. The film opens with Owens enrolling in college, participating in the track and field program and qualifying for the Olympics. It concludes with the 1936 Olympic games and the immediate aftermath.

Race tells the story of an inspiring man in an interesting age. The film shows hints of the racism Owens endured while pursuing his sport. It was a good reminder of how far we have come, and how much more we need to accomplish.

Race also works as a costume drama. I love a good costume drama. While pre-World War Two isn’t the brightest point in history, it is interesting.  I loved the costuming and seeing a little historic context.

Race is rated PG-13 and is a great film for a family movie night. The extra features are also informative and may add a little depth and education to family film night.

How Accurate Is Race on The Life of Jesse Owens:

A few of the incidents portrayed in the film seemed a little unlikely or even too good to be true. I was certain there must have been some revisionism. I understand it is a drama not a documentary, so to some extent that is fine. As I was curious, I did a little research.

I learned that Race is remarkably accurate, with a little dramatic embellishment. I find this link from History Vs. Hollywood comparing the film Race to some of the history interesting.

Summary Race on Blu-Ray or DVD:

The incredible true story of Olympic legend Jesse Owens is vividly brought to life in RACE. In his epic quest to be the greatest athlete in history, Owens (Stephan James, Selma) chooses to compete in the 1936 Berlin Olympics, where he must overcome not only elite competition but also the brutal racial climate of Adolf Hitler’s Germany. Also starring Jason Sudekis (We’re the Millers) and Academy Award® winners Jeremy Irons and William Hurt, RACE is a film about courage, determination, tolerance, friendship, and trust. 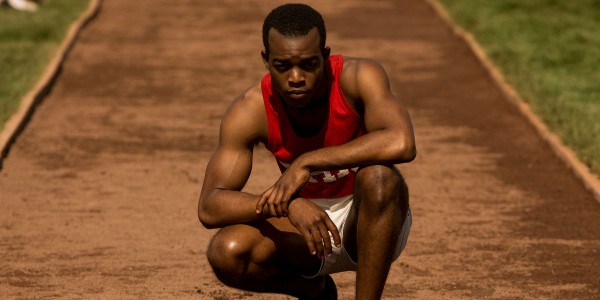 Where to Purchase Race:

Disclosure: The following section contains affiliate links. If you click on the links and make a purchase, then I receive a modest commission with no price change to you.

Race is available at popular retailers that sell Blue-Rays, DVDs and digital rentals.

For your convenience,  Amazon in the following formats: