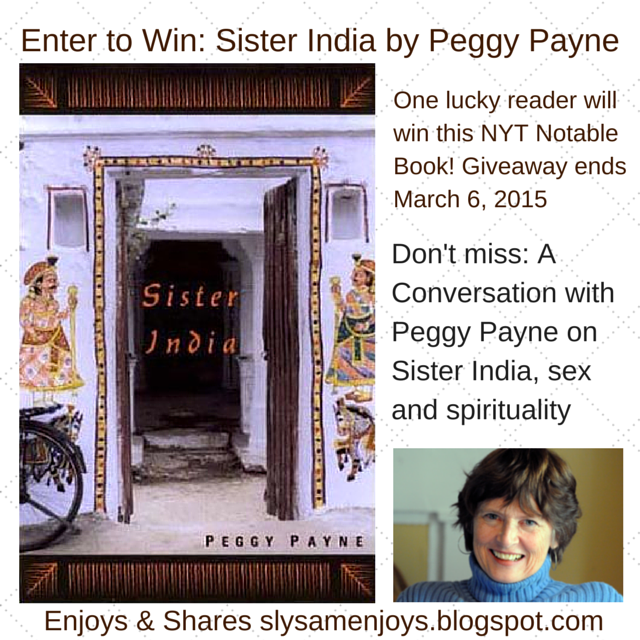 Sister India tells the story of compelling characters on a journey who find themselves in a guest house in the sacred Indian city of Varanasi. The novel features vignettes that give peeks into the characters past and what led them to this point. The book touches on travel, racism, religion, romance, sensuality, violence, and many other topics. It is fascinating and at times painful and sometimes hopeful.

Sister India‘s main protagonist is an obese American woman who distances herself from her painful past by immersing herself into her new life in India and by soothing herself with food. The story takes a turn as she starts to heal and finds love in an unlikely place.

Be sure and check out the book summary information and my interview with author Peggy Payne after the giveaway widget. In addition, to the giveaway Peggy Payne has offered a free 20 page mini e-book, At Sea With My Writing: A Novelist Cruises to Book Deals, to anyone who emails her a request. Her email address is: peggypayne@peggypayne.com. 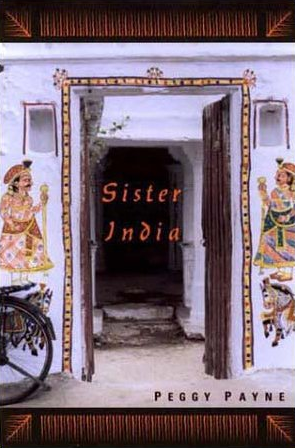 The exotic and suspenseful New York Times Notable Book that tells the story of an eccentric guest-house keeper in Varanasi, India, and the passions evoked by her sacred city along the Ganges

The Lonely Planet recommends the Saraswati Guest House, and meeting Madame Natraja, “a one-woman blend of East and West,” as well worth a side trip. Over the course of a weekend, several guests turn up, shocked to encounter a three-hundred-some-pound, surly white woman in a sari. Then a series of Hindu-Muslim murders leads to a citywide curfew, and they unwittingly become her captives. So begins a period of days blending into nights as Natraja and her Indian cook become entangled in a web of religious violence, and their guests fall under the spell of this ancient kingdom–at once enthralled and repelled by the begging children, the public funeral pyres, the holy men bathing in the Ganges at dawn.

This is a traveler’s tale, a story about the strange chemistry that develops from unexpected intimacies on foreign ground. And Peggy Payne‘s extraordinary talent vividly conjures up the smells of the perfume market, the rhythms of holy men chanting at dawn, the claustrophobic feel of this ancient city’s tiny lanes, and the magic of the setting sun over the holy Ganges. For anyone who has harbored a secret desire to go to India and be transformed, Sister India, called “mesmerizing” by Gail Harris and “a modern version of E. M. Forster’s classic A Passage to India” by Dan Wakefield, takes you on this journey without ever leaving home. 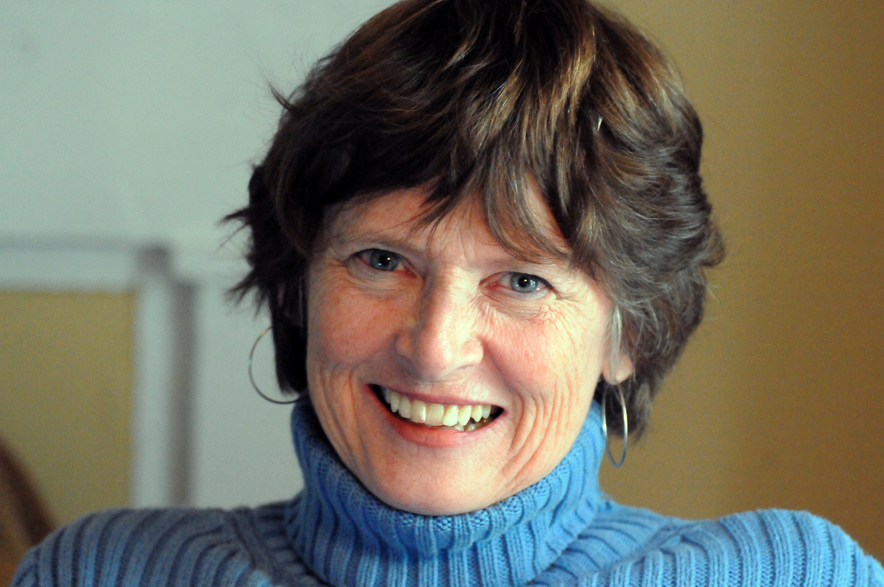 Q: What inspired you to write Sister India? How did you come up with Estelle?
I decided that I wanted to set a novel in Varanasi because I was thinking of what to write for my second novel and I really wanted to go to that holy city on the bank of the Ganges. I’d been a travel writer before writing fiction and had a trip there scheduled that was cancelled because of monsoon flooding. (I’d been to India the first time for a Society of American Travel Writers convention.) The thought of going to Varanasi — and the images of the old maharajah’s palaces along the waterfront –was still with me years later, and so I applied for a fellowship to sponsor my research. The one I got sent me to India to spend 3 months in Varanasi. It was like having an extra life — an Indian one — tucked inside my regular life.
The research I did while I was there was to take notes of everything I saw, felt, heard during my time there. I wanted to be able to set all kinds of scenes in lots of different kinds of locations in the city. I also did a lot of reading about the history and about Hinduism and did some interviewing.
I didn’t come up with the character of Estelle until I got back home. It made me very nervous that I came back home without knowing anything about the plot of the novel I was going to write. About 2 weeks later the first line of the book and the voice of Estelle/Natraja had popped up in my head.
Q: I notice that on your website you refer to your work as “novels of sex and spirituality”, please explain a little what you mean…

A: These two subjects rarely combine in novels. They’re generally considered 2 different types of readers, but I think that they are importantly related, that both take us out of ourselves and can give moments of feeling connected with something larger.

A: My psychologist husband’s specialty of clinical hypnosis was essential to me because I felt that the attraction of the Ganges was hypnotic and the maze of narrow lanes was like a physical image of a deepening trance. I wanted the language of the book to sometimes take on the rhythm and flow of a hypnotic induction or an incantation.

Q: Would you tell us about some of the awards Sister India has received? What kind of reception have you had from readers?
A: Sister India was a New York Times Notable Book of the Year. Here are some of the quotes from reviews, etc.
Sister India is a traveler’s “mesmerizing, hypnotic story,” says the creator of PBS’s Body & Soul Series, “of discovery and redemption.”
“From the novel’s very first sentence, her ravaged voice grips the reader.”
The New York Times
“A poetic mosaic of sights, smells, sounds, and tastes”
Booklist
“Benares Silk: West-meets-East defies the oriental stereotypes in an American’s
novel set in India’s holiest city.”
India Today International (a 2-page spread on the book)
“So very relevant to our times”
Benazir Bhutto
Former Prime Minister of Pakistan (from an email she wrote me)
“…Pits the ineffable demand of the spiritual against the pragmatic concerns of the worldly.”- New Age Journal
“Payne writes with a sure, graceful hand, moving her characters from fearful isolation to connection, from awakening to redemption.”
The Charlotte Observer
“Sister India is a book of wisdom, even, one wants to say, of enlightenment.”-
The Independent Weekly
People tell me that they felt as if they’d been in India while reading the book. Some wonder why I chose a main character who was so fat. (That’s how she first popped up in my head, and I think it was a way to deal with the eating disorder that I had any years earlier.)
Q: For readers who enjoyed sister India, tell us a little about your other work…

A: All my novels have sex that enhances the characters’ spirituality. All of them have some element of the supernatural. My other two novels are:

I’ve also written for publications including Cosmopolitan, Travel & Leisure, Family Circle, More Magazine, Ms. Magazine, Coastal Living, etc. I blog at Huffington Post and on my own site, www.peggypayne.com/blog, on the subject of the intersection of sex and spirituality. I’m co-author of The Healing Power of Doing Good. I’ll also send my 20 page mini book, At Sea With My Writing: A Novelist Cruises to Book Deals, to anyone who emails me a request. I’m at peggypayne@peggypayne.com.

Where to Find Peggy Payne on the Web

Where To Purchase Sister India by Peggy Payne: