You are here: Home / Shimmy for Me is a Modern Romance With A (Hip) Twist

She had me at shimmy. As a “belly dancer”, I am always interested in any book or media entertainment that involves middle eastern dance. Needless to say, I was excited to learn that Goddess Fish Promotions was organizing a Book Blast for Deanna Cameron’s new novella Shimmy For Me. I jumped at the chance to participate. Previously, I had read Cameron’s historical novel The Belly Dancer and was eager to catch a glimpse of Shimmy For Me. 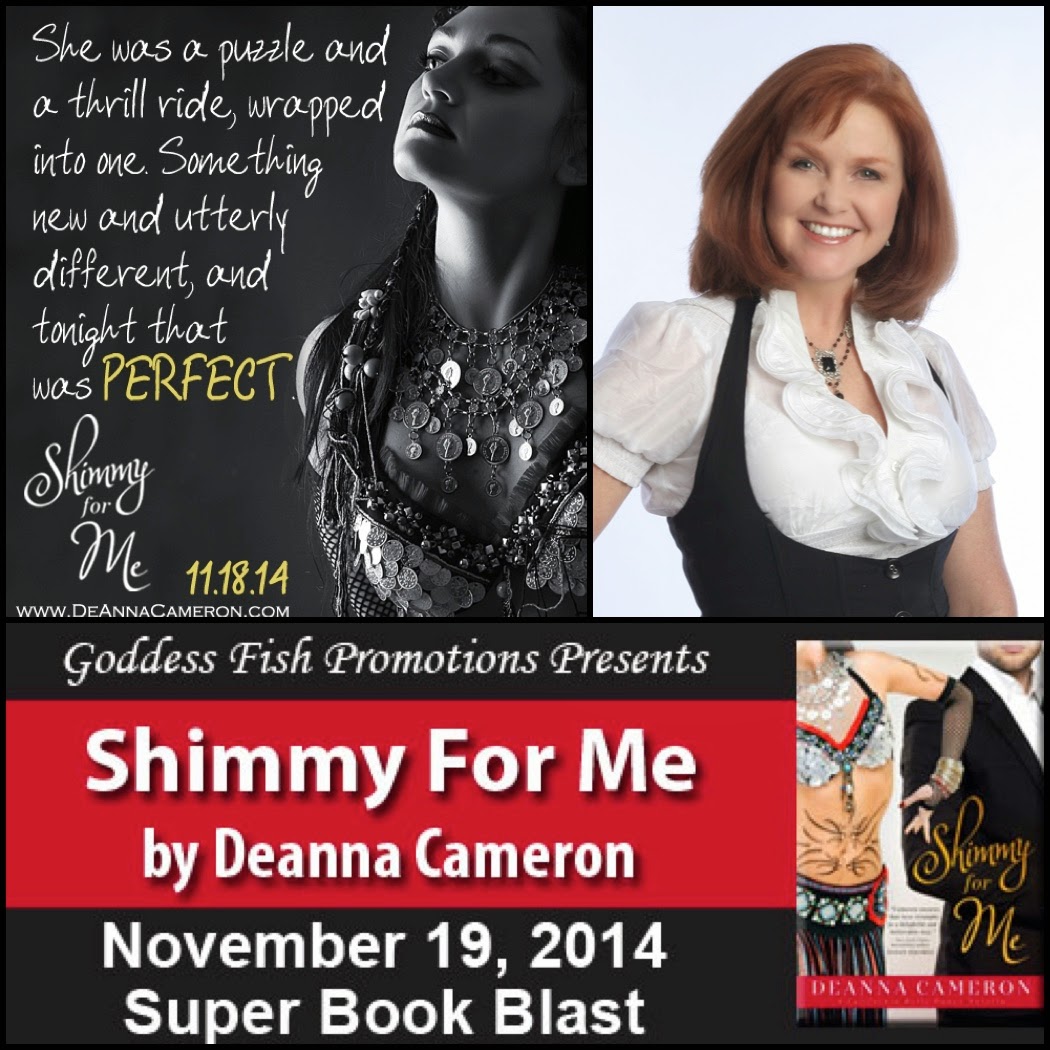 Slysam Enjoys and Shares is participating in a book blast. So this post contains a summary, a chance to enter a giveaway for a $25 giftcard, and an excerpt from the novella.

Juggling two jobs to keep her belly dance studio afloat keeps Abby Anderson’s mind off her shattered love life—until a reawakened pain sends her into the arms of an anonymous stranger she plucks from the audience of her tribal belly dance show. No names, no strings, no romance. She tells herself it’s a harmless hookup.
Until he turns up at her day job . . .
Derek Collier, the sexy heir to the Collier media dynasty, just landed everything he’s always wanted: the publisher’s seat at the Orange County Herald. Except his first order of business is to sell the newspaper. Reeling from his family’s betrayal, his only comfort is the memory of that mysterious belly dancer and the perfect night they spent together.
He won’t rest until he finds her again.
She’ll lose everything if he does.

About the Author, Deanna Cameron:

DeAnna Cameron writes novels featuring feisty heroines transformed by true love and belly dance—the oldest and most exciting dance form in the world. Her novels have been translated into Japanese, Polish, and Serbian, and her work has been praised for its “deft prose, energetic characters and . . . colorful images” by RT Book Reviews and called “most entertaining” by the Historical Novel Review. Before turning to fiction, DeAnna worked as a journalist, writing and editing for several Southern California newspapers and magazines. She’s a member of Romance Writers of America, as well as its Orange County chapter. When she isn’t working on her next novel, she can usually be found at her jeweler’s bench, creating new wire-wrap, bead, and multimedia designs. She lives in Orange County, Calif., with her family.
http://www.DeAnnaCameron.com
http://www.facebook.com/deanna.m.cameron
http://www.twitter.com/deannamcameron

Excerpt From Shimmy For Me

By the time Abby took her place on the small stage, the lights were low, and a slow, snaky melody had filled the restaurant’s main room. She was only a silhouette to the roomful of diners, holding her pose like a living statue. She usually closed her eyes during this prelude and focused on the energy of the music and the audience.
Not tonight.
In the darkness, her gaze roamed. She wanted a good view before the stage lights came up to brighten her, and blind her.
Nearly every seat was filled. A good draw for a Thursday night. Mostly couples, some groups. But it was the single men she searched for. The ones who sat on the fringe to watch.
Would it be the college jock tipping back beer in a bottle? The shy guy in the Oxford shirt fidgeting with his soda straw? Maybe the older . . .
A Suit at the bar caught her eye. One hand wrapped around a highball glass, the other tugging at his tie. Calm. Confident. And sexy as hell. The way his gaze locked on her made her tingle in all the right places.
He was the one.
Derek Collier sipped his Macallan 18 and watched the restaurant’s belly dancer come alive to the hypnotic rhythm pulsing through the dining room. When he’d seen the words “belly dancing” glowing in blue neon beneath the Sultan’s Tent sign, he’d expected the kind of flashy beads and sequins dancer he’d seen a hundred times before.
He didn’t expect this.
The poster at the front called her Zenina, a tribal fusion belly dancer. Whatever that was. From his vantage point at the bar, she looked like nothing he’d ever seen—part bohemian waif, part harem fantasy, part . . . Damn, the way she swayed and writhed up there was making it impossible to think.

Author Deanna Cameron  will be awarding a $25 Amazon or B&N GC to a randomly drawn winner via rafflecopter during the tour.

Where to Purchase Shimmy For Me and The Belly Dancer:

I received a review copy of this novella from the author and Goddess Fish Promotions to facilitate my review.  I received no other compensation yet. I say “yet” because I do include affiliate links in the Purchasing information. If you click on those links and make a purchase you support this blog as I receive a small commission on the sales. Sounds like a winning proposition to me — support the author, support the blogger, and score something fun to read (or whatever you buy from Amazon).